All Collections
Admin: How To Articles
Users and Permissions
How to Manage Roles

How to Manage Roles

Written by Manasi Shukla
Updated over a week ago

Admins (permission level of Quality Owner) can manage roles. Roles can be accessed through the User Admin settings as well as the Approval Settings.

Note: This video was created using V1.23.6. Enzyme is updated weekly so some elements may change.

Scroll down to Roles and click +Add new role.

Any user (regardless of their permission level can be added to a role). When all the pertinent users have been added, click Save.

When a role is added to approve an item, only the users with the permission level to approve (i.e Quality Owners and Approvers) will show in the approvals for that item.

For example: If the role Engineering has the following users:

When Engineering is added to a change request, only Jacob and Ryan will show as approvers.

Once you create the role, you will have to set the approval settings for that role. The default setting in the Approval Matrix is Can’t Approve.

To edit the role, make the changes you would like such as editing the name of the role or adding/removing users. Once you have made all your changes, click Save.

To edit the role, make the changes you would like such as editing the name of the role or adding/removing users. Once you have made all your changes, click Save.

Admins can also inactivate or reset roles. To inactivate a role, select the role, and click on Inactivate.

You will be asked to confirm.

Once you inactivate it, it will be removed from the Roles list. To see or restore it, click on the Show inactive roles tab.

Under the Roles tab, click on the Show inactive roles. 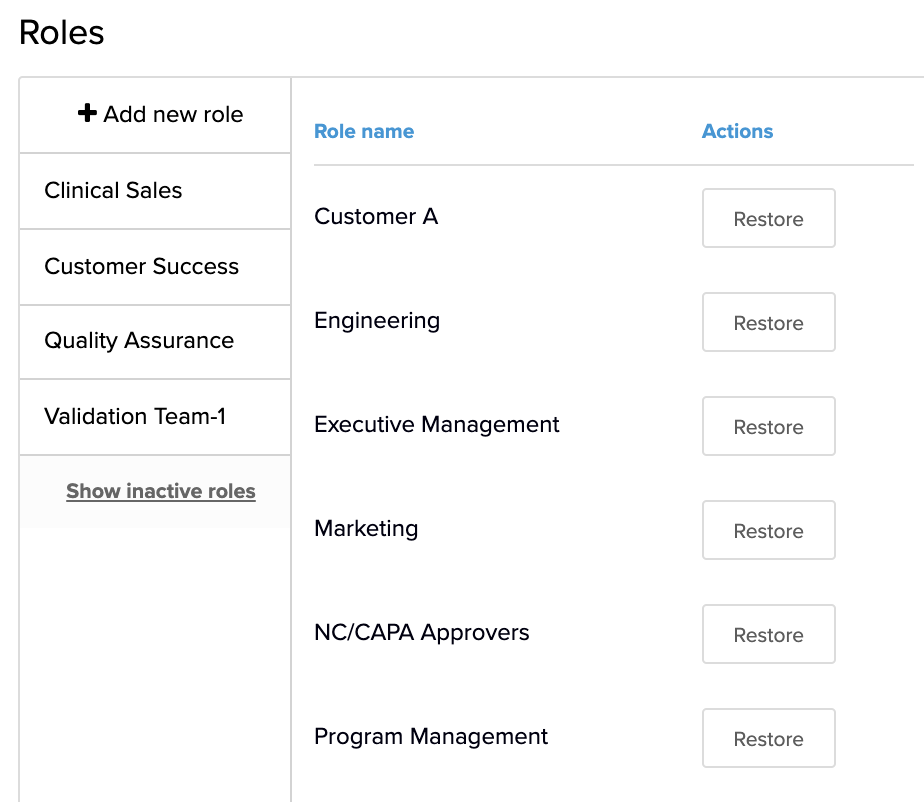 Click on the Restore button for the role you are interested in. Once you restore a role, its default permission will be Can’t Approve.

If users in the role have approved a change request, they will remain in the Change Request table even after it’s edited/deleted. This ensures traceability.

If you have any questions, you can reach us through the in-app chat or email us at support@enzyme.com.

Did this answer your question?